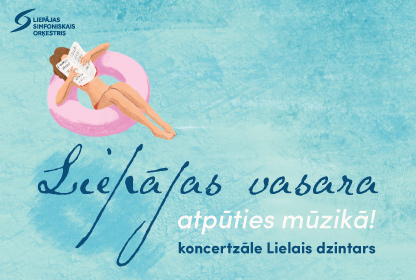 Music Festival LIEPĀJA SUMMER, annualy organised by Liepāja Symphony Orchestra, is the spiritual heir and continuation of the legendary summer symphony music cycle LIEPĀJA SUMMER, in 1783 iniciated by Peter von Biron, the Duke of Kurland. Many decades residents of Liepāja city and their families have been able to enjoy the symphony music concerts on the open air stage in the seaside park. In the last few years the festival was participated by such artists as Giora Feidman, Gidon Kremer and „Kremerata Baltica”, Avi Avital, Tokiko Kato, Maija Kovaļevska and others.

7.08.2019 19:00 Concert Hall GREAT AMBER, Chamber Hall
BEST SONGS BY WILLOW FARM
The Willow Farm group will celebrate its 25th anniversary with a release of its fourth studio album. The audience of this concert will have an opportunity to enjoy elements from the brand-new musical material. The two parts of the programme (the first part in acoustic vibes, the second one closer in style to rock concert) will feature songs from the new album, interspersed with earlier compositions.

9.08.2019 19:00 Concert Hall GREAT AMBER, Great Hall
ROMANTIC SPRING
The Liepāja Symphony Orchestra under the leadership of Andris Veismanis will be joined in a performance of Carl Maria von Weber’s Clarinet Concerto No.1 by this years’ Latvian Great Music Award winner – clarinetist Anna Gāgane, whereas in the Sacred and Prophane Dance by Claude Debussy for harp and strings the solo part will be played by Dārta Tisenkopfa. The programme will also feature the Italian Symphony by Felix Mendelssohn and Symphony No.29 by Wolfgang Amadeus Mozart.

14.08.2019 19:00 Concert Hall GREAT AMBER, Chamber Hall
BOHEME FOR CELLO AND PIANO
The Liepāja Summer festival will provide a great opportunity to enjoy chamber music gems by Sergei Rachmaninoff, Dmitry Shostakovich, Jānis Ķepītis, Pēteris Plakidis and Robert Schumann, performed by celloist Ivars Bezprozvanovs and pianist Rihards Plešanovs, and commented upon by the intelligent and witty musicologist Orests Silabriedis. The concert programme will include a special treat - the world premiere of Music for Cello and Piano by Kristaps Pētersons.

17.08.2019 18:00 Concert Hall GREAT AMBER, Chamber Hall
AGNESE EGLIŅA TÊTE-À-TÊTE
The solo recital of the energetic and optimistic pianist Agnese Egliņa will be a wonderful, intimate meeting in chamber music. She performs with courageous temper and refined female sensitivity, recognizes the intellectual chemistry of humour and the catharsis of art as creative revelation. Agnese Egliņa is one of the most sought-after Latvian pianists of the young generation.

23.08.2019 19:00 Concert Hall GREAT AMBER, Great Hall
SIXTH SYMPHONY BY IMANTS KALNIŅŠ AND REQUIEM BY DURUFLE
In the conclusion of the Liepāja Summer festival, the Liepāja Symphony Orchestra together with the State Academic Choir “Latvija” under the leadership of conductor Māris Sirmais will perform the dedication of Imants Kalniņš to his wife – Symphony No.6, inspired by the poetry and psalms of Rabindranath Tagore. The symphony will be followed by the most renowned opus of Maurice Duruflé, the meditative and sonorous Requiem, internationally favoured by many choirs. The solo part will be performed by soprano Laura Teivāne. At the organ - Liene Andreta Kalnciema. This concert is organised in collaboration with the International Sacred Music Festival.